Most recently I had perhaps the most basic of a historical/present time revelations. It called into question my knowledge and perceptions of the past; how I think the things I know are known by others, and how deeply our indigenous past and knowledge is disconnected from the present. And similarly, how I can never know what others ‘know’. And all because of twitter. That deep and meaningful platform of social engagement. Or it was in this instance.

Having been a student and researcher of Southern African history for the last 16 years, I now realize that I have taken for granted the knowledge I gained during this process. Subconsciously I think other people in South Africa know what I have learnt and that is a grave presumption. I presume all white South Africans are aware of the atrocities of this countries past. And they aren’t. Whether by not wanting to know, or ignoring it, or wanting to leave it behind, or never really having been told or never having inquired themselves. For that matter, I presume that most so called ‘Coloured’ or ‘Black’ or any other racially designated people know what happened to their ancestors, their grandparents, their parents during colonial times and apartheid. But maybe they don’t. Whether from their parents or grandparents not wanting to talk about it, or wanting to leave it behind, or never really having inquired themselves. But for these apartheid categorizations it is more likely that anyone other than white will know about these atrocities because their families have suffered at the hands of it, and it still affects their lived experiences in the present.

Centuries of dispossession, colonization, genocide, segregation and poverty can and do most certainly affect the present. In a chapter that was published in 2014 that equated Rob Nixon’s (2011) concept of ‘slow violence’ to possible long-term consequences of land dispossession in the Dwars River Valley, near Stellenbosch, I wrote:

“Nixon argues that violence can be incremental, ‘its calamitous repercussions playing out across a range of temporal scales’ and while he focuses on environmental contexts, this rings just as true for social legacies of the Dwars River Valley, if not South Africa as a whole (Nixon 2011: 2). Additionally, Nixon argues that ‘it is those people lacking resources who are the principal casualties of slow violence. Their unseen poverty is compounded by the invisibility of the slow violence that permeates so many of their lives’ (Nixon 2011: 4). Furthermore, violence should be seen as a contest over space, bodies, labour, resources, as well as time (Nixon 2011: 8). The Dwars River Valley witnessed violence on each of these levels, in a microcosm of colonial exploration, settlement and an incremental entrenchment of dispossession and subjugation. In this light, the space, bodies, labour and resources of the indigenous inhabitants, slaves and farm workers of this valley, were violently dispossessed over a period of 350 years.

It speaks to the effectiveness of this long-term process of violence that, three-and-a-half centuries later, there are almost no groups in the Dwars River Valley who claim or construct an identity as tied to that of the indigenous people who once lived there thousands of years before.”

I think these processes of slow violence penetrate not just the corners, but the length and breadth of our South African past and present. The losses are inherited by the most marginalised, the most impoverished.

But back to my twitter revelation. It started in the lead-up to Heritage Day, which lately has seen our nation’s multifaceted, dynamic and diverse cultures diluted down to braai (or Barbecue to you folk outside South Africa) day. A ‘Twitterer’ (is that a thing?) commented in the same frame by saying

“There is more to my heritage than coals and meat ne. Eish. Braai day for who? #heritageday”

And actually I agree completely. Except at the same time I don’t. I agree with the sentiment that all of our heritage has been ‘dumbed down’ and essentialized to having meat cooking on open coals. And antithetically I can also understand the pull of that construct – cooking meat on coals is a safe thing to celebrate in a nation where the cultures, languages and traditions are so diverse. What has been lost between the safeness of this celebration and the feeling of disconnect to this cooking practice is that at the very heart of it stands the culture of the ‘first people’ of this country – the indigenous Khoi and San (or collectively and generically the Khoisan, a term for obvious reasons I prefer not to use). The cultural practices and rights of these first people is so marginalized by years of slow violence that we don’t even connect this most basic of Heritage Day celebrations, the image of the National Braai Day, as having been inherited from them.

In her latest book, A Feast from Nature (Penstock Publications, 2015),  Renata Coetzee reflects on what could be the ‘Food culture of the first humans on planet earth’ as is the subtitle. No small topic then. Coetzee explores this question based on her own research and that of scientific scholars in the field. Her argument is situated within the wider discourse and understanding of our human development and evolution in Africa as the cradle of humankind. It is proud making subject matter, and in the forward, Prof Mark Solms (part owner of Solms-Delta Wine Estate along with the workers on the farm) says :

We Need to Be “more aware of how important it is for us – as humans – to preserve and celebrate what remains of the priceless Khoi-Khoin culinary heritage. By doing so…we are honouring the precious legacy of our earliest known ancestors. This legacy unites us all; it is quite simply what makes us human”.

As Renata explains, our shared human development (physically and intellectually) has been dependent on the food that was eaten. From fossil evidence of scientific bone and teeth analysis she tracks what those foods were through time. From fruits, berries, nuts and insects the development of humans is mapped through to how the eating of shellfish affected brain development and cognitive ability. The food culture of the Khoi and San is given justifiable focus in the book, as does their material culture and social life. The veld food plants of the Khoikhoin takes centre stage in what is a spectacular and colourful homage to the culinary possibilities of our indigenous plants and animals. A knowledge that has been ‘known’ and handed down for generations. The inclusion of recorded stories, recipes and cooking practices marks this book as a narrative gem sure to claim your heart as well as your senses. 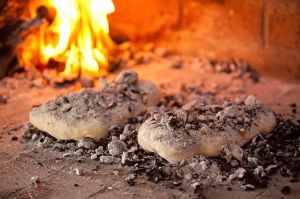 Standing at the heart of this indigenous Khoikhoin cuisine is the open hearth. The braai. Roosterkoek, potjies, ash baking, vleis op die braai and beyond to biltong…these are all Khoi traditions. It really does speaks to the horrific success of their marginalization through processes of dispossession, colonialism and genocide that their cultural and culinary influences are hardly acknowledged in South Africa in the present day.

is ONe of my tasks as Historian to share what it is I know? To work towards getting what I know ‘known’ by others? On the other hand, what is much harder to do than this is to get to know what you know, the stories of your family and past, the losses you have inherited and what you define as your heritage and why. We need to get our ‘knowns’ in conversation with each other in the hope that we can create new ways of knowing and understanding each other in the present.

Hi! I have a passion for Cape history in all its forms, from its musics, cultures, architecture & wines. I am a Heritage Consultant with a specialization in property and social history, and a PhD candidate @CCA_SA